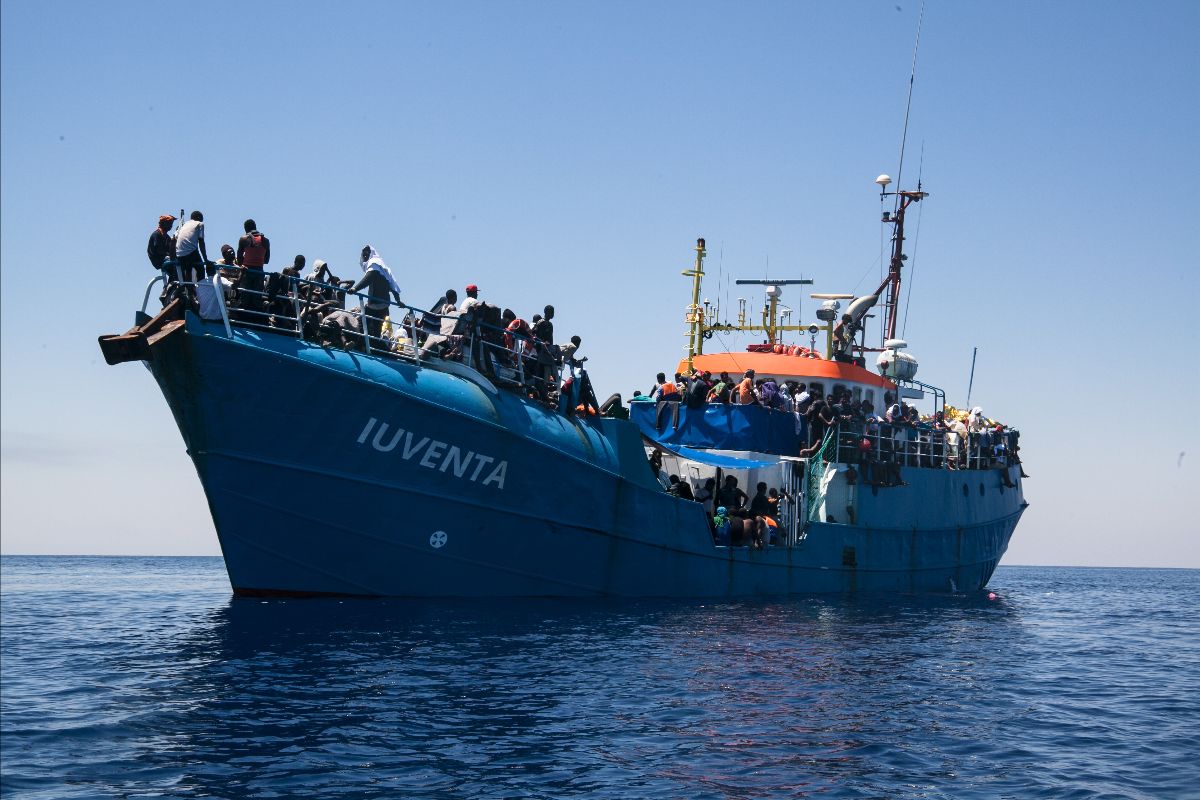 On 21.05.2022, 5 years after the most extensive and controversial investigation into
non-governmental rescue organization in the Mediterranean, 21 defendants will finally face their accusers in a preliminary hearing at the Court of Trapani.

There, a judge will determine whether to drop the charges of “aiding and abetting unauthorized entry into Italy”, or to launch a years-long trial against them which could end in a 20-year prison sentence.

The four German defendants from the rescue ship iuventa, Kathrin Schmidt, Dariush Beigui, Sascha Girke and Uli Tröder, contributed in 2016/2017 to rescuing more than 14,000 of people from drowning in the central Mediterranean Sea. The prosecution alleges that these rescues were not carried out in response to distress at sea nor to prevent people from certain death. The accusation rather sees the intention of illegally facilitating the entry of people into Italy.

The investigations initiated by Trapani Prosecutor Office in 2016 became internationally known in August 2017, when they led to the seizure of the iuventa. They also made headlines for their controversial investigative methods, which included undercover operatives, wiretapping and also the surveillance of journalists, lawyers and clergy.

All the operations of the iuventa crew were absolutely lawful. Recent Italian case law has recognised the state of necessity of people on board dilapidated boats and has affirmed that Libya is not a place of safety, concluding that bringing shipwrecked persons ashore is a duty. We will strongly reiterate these principles also in the iuventa case. Saving lives at sea is never a crime, rather it is a duty that comes from the law.

Francesca Cancellaro, lawyer of the group

Rescuing people where they can be rescued, is the right thing to do. This should never be subject to a political discussion. I am part of the generation which grew up asking their grandparents „what did you do against it?“. I owe the answer to that very question to future generations. Yet, today we face trial for having saved fellow humans at sea.

Kathrin Schmidt, the former Head of Mission onboard the Iuventa

In Trapani, as everywhere in Europe, solidarity is criminalised and flight itself – indeed, the desire to live – is stigmatised as a crime. But not everything that is legal is also just. While European border guards break laws with impunity, we are accused. While we drown in wealth, the number of victims of European border policies increases daily. #SafePassage

Dariush, captain onboard the Iuventa

The Italian Public Prosecutor’s Office considers certain behaviours in our rescue operations as signs of cooperation with smugglers. We say: by being as close and as visible as possible to those who need help, we maximise the chances of saving lives. This is the only acceptable behaviour for us in a situation where thousands of people are losing their lives or are being dragged back to the places from which they fled…

Sascha Girke, the former Head of Mission onboard the Iuventa